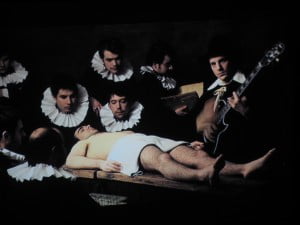 The opening of the show started with the “surprise” they announced as a guest. In the auditorium was dark, and on the scene appeared Paul Arden, former creative director for Saatchi and Saatchi, which passed away in 2008. What they did was a hologram I supose. Next followed a series of videos created by people from Saatchi. One that impresed me was one with T-Shirts. There were used 222 t-shirts to make a stopmotion animation on two people. Pretty nice and inspiring. In the end they presented the Aniboom contest and it’s winner. The event was closed also by Paul Arden by thanking to the people in the audience for coming and hoping that we’ll see eachother somewhere in another world. Then he suddenly dissapeared in a splash of smoke.
Diana & Vlad, Design Team of the Year empowered by HP