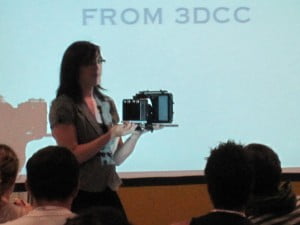 Why now 3D? Because we have digital. The workshop was an introduction to 3D movie, it’s history and the possibilities it could have for advertising. Before there were some attempts to make 3d movies, like Jaws 3D for example, but it was’t effective because the technology wasn’t so evolved. The principle that these movies are made is the two camera shooting. Exactly like a two eyes view. James Stewart explained what’s about the intraocular ditstance and how it works. One issue that consumers have is that they don’t want to wear the glasses when they are watching 3D TV. The technology to do that without glasses exists, but is too expensive. 3D will be the next big thing in advertising and even if you want to buy a 3D TV or not, they’ll prefer to give it to you for free, because the demand for this kind of content is very high.