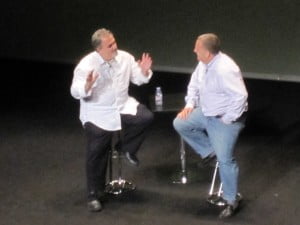 The seminar was opened by two guests from AT&T and LEGO, discussing about some of their ads. Next Jon Landau, the producer of Avatar talked about his projects from the past and how they innovated the movie industry from Terminator 2, Titanic to Avatar. In Titanic they created a real ship and populated it with digital people. Were the first ones to do that. Same thing happened with Avatar, they innovated by introducing the new sincronization system of the actor and the 3D character. They had to do the same things the virtual characters did in the movie. Was their own interpretation. And the big news is that there will be an Avatar 2, same great graphics, with a better script, from what James Cameron says.