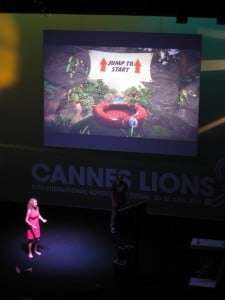 Microsoft presented the new Mobile OS, Windows 7 for mobile which will be available in few months. Another new thing is for the Xbox and it’s called Kinetic. It’s a device that attaches to the console and detects your moves so you can control a digital animated character from various games. In advertising this thing can be used, as they showed us, with some bar codes which can be scanned with this device and activate new animals, or bonus items in games. They showed this concept few years ago with a child if you remember that was reacting, and interacting directly with you. You could swim, play and transfer different things from the real life into digital. I think will have big succes, like the Wii console did. One thing that I didn’t like was the ads for the Bing search engine and the ones for the new Windows 7.  They said that they wanted  to contra attack the Apple campaign, the one with “Hi i’m a Mac, I’m a PC”. They wanted to do it in a funny way but the truth is that is crap, in my opinion. I’ve tried the OS and is much better than Vista but the advertising has to catch up Apple from behind.