It’s the same feeling you get when you take off the shoes to walk on a silky beach. Only this time, your mind is the one feeling ticklish when you set foot in the Palais des Festivales, for the Cannes Lions magic event. You can’t help feeling creative when you walk around the city aswell, which one time made me comment that „the French have put some kind of Inspiration Dust in the air”.

On Sunday, all the fuzz was made around the seminars. There was no award ceremony at the end of the day, so everybody concentrated on what those great people said on the stage of Debussy Theatre in Cannes. 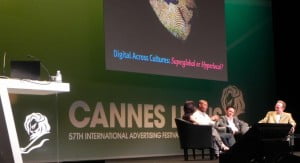 „These guys have got another piece of brain attached” i heard somebody saying in my back as i was taking my seat. It was two o’clock, I was obviously late and the discussion was already exciting. On stage, directors from Textappeal, Columbus, Disneyland Paris and Facebook (no, not Mark Zuckerberg yet, but the Head of Planning and Strategy – Trevor Johnson), talking about how digital will change advertising, making it superglobal or, at the contrary, hyperlocal. Social media came into discussion and everybody remarked that not all the countries understand it the same way. In Japan, for example, you are considered superficial if you’ve got too many friends on Facebook. So the challenge is to get a campaign that uses a big idea, declined for all the local markets. Plus, you have to get your client happy, so if you can resolve this puzzle you may be what they call a magician. One of these happy cases was the campaign for the Devassa beer in Brasil. Practically, what they did was take superstar Paris Hilton out for fun during three weeks, filmed everything, got the delicious videos out on the web, got comments, got spread in social, made a provocative ad out of them, got banned, celebrated the success. By the way, Devassa means „bitch” in their language. Now imagine a dirty blonde Devassa having fun in a club near you (here’s an article about the campaign, in the ny daily news – http://www.nydailynews.com/entertainment/tv/2010/02/26/2010-02-26_paris_hiltons_sexy_new_ad_for_devassa_beer_sparks_outrage_in_brazil.html ). 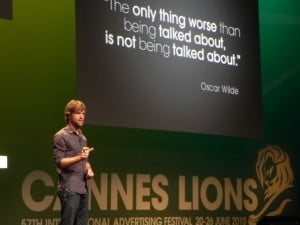 Maybe the most successful seminar of the day was the one with the guys in Tribal DDB London. That may be because charismatic Matt Ross received lots of praises from most women in the room but also because these guys were bloody eficient. Great presentation about social media and about what it really means. The „How to get it right in social media” guide includes advice like:

Practically social media is not about your brand, but about what the consumers have to say about it. So grab a chair, start listening and try to spot the spaces where your brand can come in and satisfy a need. Just like Ashton Kutcher did. He photographed Demi’s behind (something that people wanted) and posted it on Twitter (letting everybody talk about it). In no time, he got to be the first one to have over a million followers on the website. Ashton Kutcher understands social media.

And if you put a little bit of creativity in all your social product, you might make it really shareable. The guys from tribal DDB did it with the Monopoly City Streets Campaign. The problem in the brief was the fact that people go online more and more and don’t play board games anymore. What did they do? The went online, teamed up with Google and created, for a few months, a global version of Monopoly that used Google Maps. You could actually buy any street on Earth! It was a huge succes and 5 million people got interested to spread the word, because it was creative, meaningful and useful. Lots of people bought the boardgame after a few months. Here’s the wikipedia page for the concept http://en.wikipedia.org/wiki/Monopoly_City_Streets . 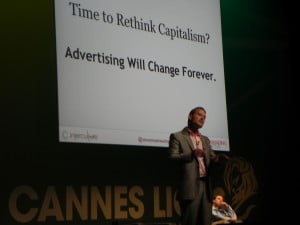 Sunday had lots of other interresting seminars among which the one sustained by Mainwaring Creative where we all got an alarm signal that said that we should reverse everything we know about advertising. That means „Push” is now „Pull” – don’t fill up the mind of your consumer with a message but instead let him sent messages on the topic you’ve started. Also „Talking” is now „Listening” – obviously you have to listen to their needs. „Image” should be transformed in „Authenticity” – because consumers know when you’re being fake, and „Center” is now „Flow” because now it’s easier to make your story travel through your consumers who act like co-authors.

Talk to Simon from Mainwaring at www.simonmainwaring.com .

The guys from Sapient Nitro held their seminar at 5 o’clock, when everybody was already relaxed and thinking about the evening long walks through this beautiful city. They took advantage and talked about happiness. About how the relationship between a brand and it’s consumer resembles a no strigs attached lovers’ relationship. Loyality is an illusion, because people have more and more trusted sources for advice in buying stuff. That’s why your brand should always be approacheable, should have something that people want, should listen, make you feel special, invite your friends to it’s party and should have absolutely no strings attached. These were the principles they used when they created „Share Happy”, the ice-cream that shares smiles. Literally. The smiles are collected by a special ice-cream vending machine that gives you a piece of cold pleasure if you smile in front of the camera. You can also upload the picture on facebook and share it with your friends. I am now in the press room, at the Palais, so i’m gonna go out and have a picture of it for you. Back in 5.

Back. I’m off to see what the second day holds for us here. Lots of seminars and workshops on the way and people are talking about the Dutch Beach Party tonight. Everybody’s saying it’s gonna be a blast. We’ll see about that and we’ll blog too, but tomorrow! Now let’s have some Cannes!