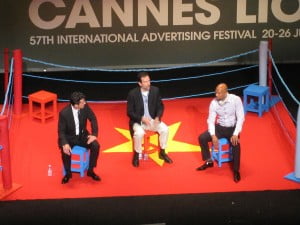 This was entertaining. They mounted on the scene a box ring to dispute the future of the advertising. Was the best mis-en-scene show. They invited an actor from Hollywood, Common, and talked about integrating advertsing in movies. Another guest was the maker of Zombieland, the movie. In the end of the movie, if you’ve watched it, the main character is crazy about a cookie, called Twinky. They tried to find a brand that wanted to put their product instead of this cookie but no succes.
In the 4th round Nick Cannon appeared and also said his opinion about advertising and other stuff. Nice show overall. I,ve recorded some rounds from the match and maybe i’ll upload them somehow, but the internet at the auditorium was down. Everybody was using it, and maybe their wifi routers melted.